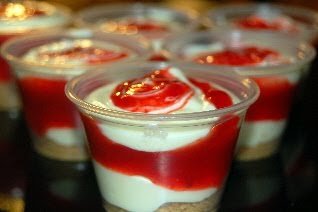 Yesterday I had an event to attend and I put a new twist on an old favorite.
For years, usually in the summer for barbecues, one treat I make is a Cheesecake-like parfait. This time for small portion sizes as well as the cute factor I changed it up a bit and made it in 2 ½ ounce shooter cups (I usually use these cups for jello shots which are always fun, but that’s another story or two, three or four…lol).
They were a huge hit and traveled well.
The kids really like these too, matter of fact they could certainly whip these up themselves with a little guidance from a helper.

In your mixing bowl combine the cream cheese and sour cream until blended. Pour in the pudding mix, sugar and vanilla and mix on medium for 3 minutes more. Place in the refrigerator for at least 15 minutes.

Crush the graham crackers in your food processor until just crumbs. Add in the butter and 1 TBS sugar and pulse until combined. Place in a small bowl and set aside.

In your blender or food processor blend/pulse the cherry pie filling until it become syrup (no chunks left). You can of course make your own syrup from strawberries, blueberries etc instead of the pie filling if you have the time. Set aside.

Keep cold until ready to serve or transport. These really are so easy; folks will think you worked harder than you actually did 🙂