Guess what?? I won a trip to the Florida Keys in the Philadelphia Florida Keys Cook-Off a few weeks ago! Pinch me! The competitors had to cook in 2 challenges and I won! I wanted to share my Prize Winning Key Lime Pie Recipe today and tell you a little bit about what went down! It’s long, feel free to hit the jump to recipe button 🙂

I LOVE hearing in the comments below, comments and images on Instagram and  Facebook as well as in emails just how many of you have made this pie! And how it has become a part of so many special occasions! Thanks for letting me know! This pie really is SO easy, creamy, refreshing and delicious…Plus you can’t mess it up!!

First the story…then I will show you how to make the BEST Key Lime Pie…So many people have now made my Prize-Winning Key Lime Pie recipe! It’s just so cool! Hope you enjoy it as well!

24 Philadelphia-Area Influencers were invited to The Restaurant School at Walnut Hill College on Walnut Street in downtown Philadelphia for the 2nd Florida Key’s Cook-Off. The first was held in 2015 in Montreal.

I was thrilled to be invited to cook! As a food blogger, when I make what I share here on Souffle Bombay, it’s just me (me and my mountain of dishes) alone, at home doing what I do.

So imagine just how fun it was to get out with other foodies and have some fun in the kitchen. Even if I wasn’t the winner, I would have loved the whole experience!

This was my first trip to a culinary school. I was super-impressed with The Restaurant School at Walnut Hill College in Philadelphia. From the many kitchens for the students to learn and work into the themed rooms for dinner service and the overall look and feel of the place. it is something special!

Chef Bobby Stokey was our host and one of the three judges. Chef Bobby did a couple of culinary demonstrations before we all got down to it. He showed us a couple of delicious Key West Style seafood dishes. So fresh and simple!

Chef Bobby owns a number of restaurants in the Florida Keys (Marker 88, Sundowner, Ballyhoos and Senor Frijoles) so he sure knows his way around a kitchen as well as the flavors of the Keys!

I found it interesting that traditional Key Lime Pies down in the Keys are topped with meringue, like a lemon meringue pie.  My husband loves Key Lime Pie and orders it out when he comes across it, yet I never saw one in-person with meringue in the Philadelphia Area, it’s always whipped cream.

Going into the challenge we all knew we had to make a Key Lime Pie. Of alllll the things I have made in my life, a Key Lime Pie wasn’t one of them. So, a few days before the competition I made a few variations to see which my family enjoyed more.

We each were allowed to bring a secret ingredient to make our Key Lime Pie. My first thought was tequila, so I made one in my test run with that. My second thought (because I know what my husband likes in a dessert) was sour cream.

I let my family and a couple of friends blind test both Key Lime Pie Recipes and the result was down the middle! SO…the night of the competition, I brought both thinking, I would decide which to use in the moment.

It was just like an episode of Masterchef or Top Chef, we all had to stand in our places…Ingredients were set up and Chef Bobby yelled Ready…Set…GO!!! And we were off! It was a little bit crazy!

This easy Key Lime Pie Recipe came together quickly, so since I had extra time, I decided to use leftover limes and make some candied lime peel. Which I had actually thought about making at home as my secret ingredient but then thought. Nope, limes, sugar, and water will be there…if I have time I will make that there so I can bring something that won’t be.

While our pies chilled, we got down to our second challenge…the mystery ingredient from the Florida Keys which turned out to be beautiful Yellow Tail Snapper fillets. I had never worked with or eaten it before, however, I am pretty familiar with halibut, so I figured it was similar to cook with.

Ingredients were set out for us to choose from. I quickly decided to do something I thought no one would do. A curry sauce, similar to one of my favorite ways to prepare halibut…Take a look at my recipe (image below) for Pan Seared Halibut in Thai Curry Sauce.

I grabbed tomatoes, ginger, onion, etc. I cooked them down and finished the sauce with coconut milk and seasonings. Whatever I could find in that kitchen to give it the flavors I was thinking of in my head, I grabbed. As far as the fish, I simply pan-fried it with seasonings, then sat it atop the sauce I made.

Judges came around and tried each of our dishes as we raised our hands once complete (we had 45 minutes for the pie and 45 for the protein).

I kept hearing Gordon Ramsay in my head. “Stick to one thing…do it well, taste, taste, taste” so that’s what I did. Each judge independently tasted and scored our yellow-tail snapper entrée as well as our pie. Then the scores were merged.

I brought my mom and my sister to watch the festivities and enjoy the night. However I barely saw them since ya know…since I was cooking away, lol! I am a sweaty wreck in the video. Those kitchens were HOT!

I was like OMGosh and walked up to the balcony where Chef Bobby, Pat Croce, and others were waiting to congratulate me.

And I gave Chef Bobby a BIG kiss!!!

II hope you make this Key Lime Pie, you will love it!! It is light, crisp, cold and delicious. Bring it to BBQ’s and graduations (keep it in the fridge until serving). Make it for Mother’s Day, a new neighbor, someone who needs a smile put on their face…or make it just for you and eat the whole thing!! Report back and tell me what you think!!

This pie actually holds up great. You can make it a day ahead of time and put the whipped cream on top the day of. It will taste good for days! If you have a pie or cake carrier to store it in that’s the best way to keep it fresh without messing up the whipped cream.

Other recipes to try

If you enjoy making desserts (or eating them) as much as I do, you need to try one or all of the following: If lime is not your thing, try my Easy Lemon Pie, just like Key Lime Pie but with lemon.

Homemade Apple Fritters. Just a handful of ingredients yields a memorable dessert or breakfast treat! Everyone loves an Apple Fitter!

When cranberries are in season, this “pie” will get rave reviews! It’s different and delicious! Get the recipe for this vintage Nantucket Cranberry Pie. 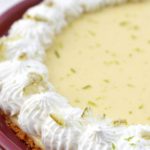 The crust doesn’t need to be too sweet since the pie filling is very sweet and tangy, add 3-4 TBS sugar.
I like a little bit of a crumbly crust for this. If you want it held together more firmly, add in an additional TBS of melted butter or two.
If you want a thicker crust, use 2 cups of crumbs (or if using a larger pie dish).
When pulling the pie from the oven…don’t put your thumb in the pie…Trust me, I have done this more than once with pies! You may want to bake it on a baking sheet…Just in case.
Keep your whipped cream chilled until ready to use.